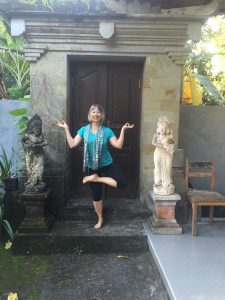 I had an epiphany whilst getting a massage today. Like most of my epiphanies, they are rather small happenings with big meanings.

Here I was lying on the massage table thoroughly enjoying this Balinese massage. I was on my stomach, the aroma of spices and flowers wafting into my nostrils from the warm liquid in a bowl below my face cushion.

Was it a mosquito, a midgie? It was on my arm near my wrist, but I couldn’t move. My back was being massaged and I was enjoying it so much.

My attention kept getting drawn to the discomfort down around my wrist. The kind of discomfort that comes from an itch that you can’t scratch.

So I continued to lie there and not react to the strong urge to scratch it. I felt the discomfort whilst focusing on the delicious sensations of the massage.

The whole time I have been in Bali, I have been getting mosquito bites here and there. It’s hard to avoid. Nothing horrendous though. I’ve scratched all of the bites instantly and then they get inflamed and last at least a week still itchy.

As I was lying on the table with this urge to scratch but didn’t, I had an awareness-thought that maybe if I didn’t scratch it, the ichiness and discomfort of the bite might just go away immediately.

Not reacting to the urge to scratch actually made it disappear. NOT REACTING didn’t give it a chance to get inflamed and cause an inflammatory response that would last for at least a week.

Hmmmm. This sounds applicable to other areas. Where else I can practice non-reacting?

Not adding fuel to the fire and instead cultivating the ability to be with it and let it dissipate and dissolve on its own.

[bctt tweet=”Not adding fuel to the fire and instead cultivating the ability to be with and dissolve on its own.” username=”aesha108″]

My description is not as wholistic as the moment lying on the table and having that moment of connecting the idea that when I don’t react to situations including bites, they go away and don’t get inflamed and hang around for a long time.

My body shows me proof. On my right arm are numerous bites I reacted to instantly without pause and they are red sore, still itchy. On my left wrist is the bite I didn’t react to and I can hardly see it and IT DOESN’T ITCH!!!

Well lovelies… as I said. The epiphanies are small things but my higher self put it together for me as I lied on the massage table and I loved it. Brilliant.

With love, I share and encourage you to look at areas in your life where you go into automatic reaction and see if you can pause, recognize your urge to scratch it, and instead don’t react but rather witness and invite new creative ways of being with to emerge.

Join me for Online Yoga. If you would like to know about my online Yin Yoga classes go here.

Meditate with me: For audio meditations you can find me on Insight Timer

Busy is not Better

By signing up you agree to receive emails from Aesha Kennedy that you can unsubscribe from at any time.

043: CREATIVITY AND INTUITIVE FLOW Aesha Kennedy
051: The Gold Within You | Clare Deale
005: Own Your Zone | Swapna Thomas
078: Creative Wilderness Trail
046: You Are Resilient Brave Beautiful with Karen Humphries
030: Manifesting through the Voice with Dominique Oyston
069: Create Your ARTmosphere Part 1
021: Lighthouse Revolution | karen gunton